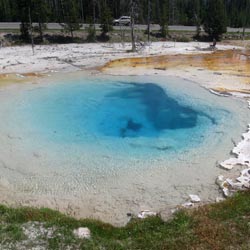 , which is available at the trailhead.

This trail is an easy 0.5 mile (0.8 km) loop boardwalk. You will see various hydrothermal features that are expressions of Yellowstone's volcanism. No two features are exactly alike, yet they can be grouped into those with a lot of water (hot springs and geysers) and those with limited water (mud pots and fumaroles).

Thermophiles (heat-loving microorganisms such as bacteria) usually form the ribbons of color like you see here. The green, brown, and orange colors are mostly cyanobacteria, which can live in waters as hot as 167°F (75°C). At this temperature they are usually yellow-green. As water cools, different varieties of cyanobacteria appear in shades of orange, rust, or brown. Color may also change with the seasons and sunlight levels.

At Silex Spring, consider how this hot water arrived at the surface. Deep beneath your feet, heat from partially molten rock beneath the surface is transmitted up through the earth's crust. Ground water circulating through these rocks becomes heated and follows cracks upward. Where the hot water can escape at the surface, a hot spring forms.

Silex is Latin for silica, the major component of rhyolite, the primary volcanic rock in Yellowstone. Hot water dissolves silica, which precipitates as siliceous sinter along the bottom of the spring and in runoff channels.

Thermophiles thrive in the overflow of Silex Spring. They provide food for flies living in and on the hot water. The flies then become food for mites, spiders, insects, and birds.

The activity of Silex Spring, like that of other hydrothermal features, can change. For example, after 21 years of dormancy, Silex Spring erupted many times from 2000 to 2006.

At Fountain Paint Pot, what you see varies with the season. In early summer the mudpots are thin and watery from abundant rain and snow. By late summer they are quite thick. If the mud is thick today, watch out! Bursting bubbles may lob mud over the rail.

The mud is composed of clay minerals and fine particles of silica. In this area the rock is rhyolite, which is composed primarily of quartz and feldspar. Acids in the steam and water break down the feldspar into a clay mineral called kaolinite. The Crow tribe used to paint their tipis with this mud.

The hiss and roar of a fumarole comes from gases?steam, carbon dioxide, and a little hydrogen sulfide?rushing from the earth through a vent. A fumarole's channel system reaches down into the hot rock masses, but it contains very little water. When water contacts the hot rock, it flashes into steam, which increases its volume 1500 times and drives the gases from the vent.

Red Spouter, which originated with the Hebgen Lake Earthquake, exhibits the behavior of all four thermal features. In the spring and early summer it is a muddy hot spring that may seem like a geyser as it splashes reddish water several feet high. As the water table lowers in late summer and fall, Red Spouter seems more like a big mudpot, and then a hissing fumarole.

Before you descend the stairs, walk out to the viewpoint on your left to view the geysers below. From this overlook you might see half a dozen geysers erupting at the same time.

Yellowstone is one of the few places in the world where geysers occur. The essentials for geysers and hot springs exist here. Snow and rain provide water, heat from deep in the earth warms the rock and water above it, and fractures in the rock provide the "plumbing" through which the water circulates.

A geyser's channels have constrictions that prevent the water from circulating freely to the surface where the heat would escape. Pressure builds. Steam rises and is trapped by the constrictions and overlying cooler water. At a critical point the confined steam actually lifts the cooler water and causes the geyser to overflow or splash. Pressure release continues, more steam rises and forces water out of the vent. The eruption begins.

Twig Geyser is the first regularly erupting geyser on this trail. Look for it at the base of the steps on the right. Twig erupts in a series of brief eruptions 2-10 feet (0.6-3 m) high.

On your left, Jet Geyser may erupt before an eruption from Fountain Geyser. During its active period, Jet erupts every few minutes up to 20 feet (6 m).

Across from Jet, Fountain Geyser may appear empty before an eruption. When it does erupt, it is one of the most impressive geysers in the park. Eruptions reach 20-50 feet (6-15 m) and last 25 minutes or more.

Behind Fountain, you can see the pool for Morning Geyser, which seldom erupts. Should you be so lucky, you will see one of the park's largest geysers. Morning's eruptions have been high (80-200 feet/25-61 m) and wide (100 feet/31 m).

Before 2006, Spasm Geyser erupted for an hour or more until Fountain erupted but now its eruptions are shorter and more frequent. Spasm's eruptions may start with bursts up to 20 feet (6 m), then splashes about 3 feet (0.9 m) high.

You will probably see Clepsydra Geyser erupting. This nearly constant performer splashes from several vents and its steam can be seen throughout the Lower Geyser Basin. Its name is Greek for "water clock," and was given because the geyser used to erupt every three minutes. Since the 1959 Hebgen Lake Earthquake, Clepsydra erupts almost without pause. Sometimes it stops near the end of or after Fountain's eruption.

Below Clepsydra you can see the vast amount of sinter deposited in this area. Sinter was first deposited by hydrothermal activity in the Firehole Valley as glacial ice retreated. It continues to accumulate at different rates depending on the water chemistry of each spring and the rate at which it erodes. The sinter mound beneath these geysers has been building for thousands of years.

Dead lodgepole pine trees in the geyser basin are pioneers that did not survive. Establishing a toehold in thin new soil, the trees enriched the soil through natural recycling of minerals and organic material. In time the increasing humus would have nurtured a mature forest- if the trees hadn't drowned when nearby hot springs shifted. Silica also penetrated the trees and hardened their bases. Perhaps lodgepoles will one day grow again in this area. Notice the grasses and other plants starting the cycle.

Celestine Spring is the last hot spring on this trail. No documentation exists of how this spring was named?but its blue color does seem to match the deep blue of the sky.

The view to the north is a panorama of the major events of Yellowstone's geologic past; these events created this area's unusual features. Today's landscape had its beginning when the earth's crust was bent, fractured, and heaved into high mountains such as the Gallatin Range in the distance.

Next, volcanic eruptions shaped the land. A massive eruption 640,000 years ago created the Yellowstone Caldera; its rim is in the foreground of the Gallatins and to your left. You can see younger lava flows on the skyline of the Madison Plateau to the west.

At various times in its history, Yellowstone has been buried beneath glaciers. During the most recent glaciation era, which ended 13,000-14,000 years ago, an ice cap covered the center of the park. Glaciers extended over the plateau into the valleys of the Firehole and Madison rivers. As the gravel-laden glaciers covered hot springs and other hydro thermal features, the ice melted so rapidly that great mounds of gravel were deposited. The Porcupine Hills (the low hills in the foreground with sparse trees) are just such gravel mounds. On cold mornings you can still see steam rising from the hot springs in these hills.

The Lower Geyser Basin, of which Fountain Paint Pot is a part, sits on unstable glacial gravel, which rests upon solid rock. The jarring energy of an earthquake can make the gravel vibrate and shift position, and compact or fracture. All these changes affect water supplies to hot springs. They might force muddy water to the surface, clouding existing pools or creating new ones. They might divert water from a pool, causing it to dry up. Water temperatures might also increase or decrease due to these subsurface changes. In the days after the Hebgen Lake Earthquake of 1959, all the above changes were observed in various springs of the Firehole geyser basins. The epicenter (point of the quake's origin) was determined to be about 31 air miles (50 km) to the northwest.