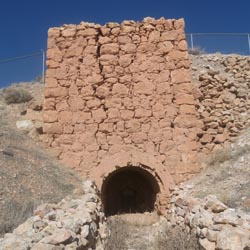 This is a short hike up to a 120-year-old lime kiln built by John Kyhl for Jens Larson Jensen. Also at the parking area are an old water wheel and Sevier County's first jail.

Trail Condition: Class 1 (Trail is either paved or gravel. Navigation skills are not needed because there is only one trail or because there are signs. Elevation gains are gradual or there are stairs.)

This is a short hike up to a 220-year-old lime kiln built by John Kyhl for Jens Larson Jensen. Also at the parking area are an old water wheel and Sevier County's first jail.

The old pioneer water wheel was used north of Elsinore to water high ground above the canal. It was used to irrigate 120 acres of land, and occasionally, another 100 acres of a neighbor's land.

The land was fertile. The USU agriculture department reported that it raised the best alfalfa in the valley.

Ownership of the waterwheel was used by the Magleby family of Monroe, and Peter Christensen of Elsinore. To the best information available, the unit was built by a company in Provo, Utah.

The water pump was used in the building of Hoover Dam at Boulder, Nevada. It was later purchased for use in Sevier Valley, where it operated for over 40 years.

The Sevier Chapter of the National Society of the Sons of the Utah Pioneers is dedicated in supporting the preservation of all worthy artifacts of pioneer heritage.

All projects on this site were developed and preserved by Jack Kyhl and Doug Loosle, by authority of the National Society of the Sevier Chapter of Sons of Utah Pioneers.

Myron Nathaniel Hanchett was the first sheriff of Sevier County

He was born in Pensylvania in 1832. As a boy, he drove an ox team for Knute Peterson on the 2000-mile march of the Mormon Battalion.

They were told if they would obey all orders and not take anything that was not theirs, they would finish the march in safety.

When they came to Tucson, Arizona, the Mexicans heard of their coming and had vacated their homes, leaving food on the stoves. The men were nearly starved, but they were true to the promis and never touched a thing.

He was promised a land grand, and was honorably discharged 16 July 1847. He lived in California during the gold rush, in charge of stage coaches, having the coach and team ready when the stage came in.

He was a partner of Samuel Meacham during this time. The Meacham family contracted small pox and were cared for by Nathaniel, he having had small pox as a child.

Mr. Meacham died, and as a last request, asked him to care for his wife and two small children. He married the widow, Sarah Call Meacham, in California about 1852. He came to Utah in 1857, settled in Payson where he took an active part in the Walker and Black Hawk Wars.

With his family he was among the first settlers of Sevier County. In 1865, he was appointed the first sheriff in Sevier County by Probate Judge William Morrison, and the county selectmen (commissioners).

He was a very generous man, sharing his means with those in need to give assistance.

He was the father of two sons and three daughters. His remaining years were spent in Annabella, where he lived with a son. He died 27 March 1903, and was buried in the Annabella cemetery.

The first county jail was built in 1879, and was located on Third North and Main Street. It joined the county court house on the east. The jail consisted of two cells built by spiking 2x4s and nailing them together. The cells were plastered. The roof was shingled and was supposed to be rainproof. A high board fence was built around the lot. The bed ticks were filled with straw and a board seved as a bed.

The trail to the lime kiln is about 0.1 miles. There are a couple of benches along the way.

The plaque on the monument reads:

This old lime kiln is the best preserved of seven kilns constructed north of Richfield during the late 1800s. It was built by John Kyhl for Jens Larson Jensen, a Swedish immigrant. The lime was used in the construction of homes, churches, and schools of the early settlers. Limestone was quarried in the nearby hills, melted down in the kilns, and cooled - a process that took several days. The result was a fine, white lime powder suitable for brick making, mortar, and plaster. Use of this kiln ended around 1905, when Mr. Jensen went blind from exposure to the extreme heat.National Society of the Sons of Utah Pioneers

We had seen the lime kilns from a distance but didn't really know what they were, so one day we decided to go check them out. We were quite surprised how cool they were and that they weren't more popular.