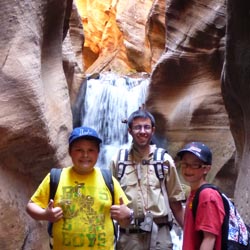 Kanarraville Canyon is a pleasant hike along and in Kanarra Creek. Several stretches of the creek pass through slot canyons and past several waterfalls, including Kanarra Falls.

Gear: Neoprene socks are recommended. Bring a fleece jacket or something else that will keep you warm when wet.

It took us roughly an hour and a half to reach the narrows of Kanarra Canyon.

Then there is another stretch of pretty narrows.

We took the 11-year-old Scouts from our ward (Troop 601) hiking up Kanarra Canyon for our May activity.

I gave my two pairs of neoprene socks to Domonic and Dylan. The water was very cold and by the time we reached the top, our feet were very numb and sensitive.

We turned around at Upper Kanarra Falls and started our trek back.

We stopped at Middle Kanarra Falls for lunch and to let our feet warm up in the sun. The boys ran around and explored the side canyon.

You know it's a good hike when the Scouts fall asleep on the ride home.

Since parking at the trailhead was $10 per vehicle, we decided to park at the church in town and walk to the trailhead.

While Tara and I were waiting for Anthony, Arianne, and Kevin (they missed the exit), we decided to play around on a nifty playground toy. Anyway, on our third or fourth spin, Tara scraped her knee pretty good. Off to a great start.

This hike came recommended by a cousin. About all we knew going into it was, "there's a sweet slot canyon in Kanarraville. The first part up to Kanarra Falls is pretty easy, and that's where most people turn around, but if you keep going, it gets harder." Since we didn't know how technical it would be, we brought wetsuits, rope, and other basic canyoneering gear. We asked a young family to point us in the right direction, and we were off.

The first couple blocks were awesome. Just what we came for... nice paved road... pretty view... the works. It only got better from there.

After a couple of "you better watch out or we'll boot your car" and "don't trash our canyon" signs, we started up the canyon. The first 3/4 mile follows a dirt road. There are a couple of stream crossings. They were small enough to jump over, boulder hop, or just walk through. Keep in mind that this was October, so the water was quite cold. At the end of the dirt road, the trail continues up Kanarra Canyon. The sketchiest part of the whole hike was where you have to wak along a pipe because the trail has eroded away. Piece of cake. There are several small waterfalls along this section of trail, but the coolest ones are farther up the canyon. The fall colors were amazing. The red sandstone cliffs at the mouth of Kanarra Canyon were very picturesque. More stream crossings. A dead tarantula (or maybe just a shed exoskeleton). Anthony decided to climb up to a sandstone cave. It was about 6 feet deep and had several bats inside. Did I mention that there were lots of stream crossings? By this point, we had completely given up on trying to keep our feet dry. More fall colors.

After about an hour and twenty minutes, we reached the slot canyon. The cliffs are very majestic and seemed to come out of nowhere. We came to Kanarra Falls just a few minutes after entering the slot canyon. Tara and I stayed behind to shoot a 360 panorama at the base of Kanarra Falls. Kevin, Anthony, and Arianne went on without us.

We figured that this was the point where most people turn back. But we kept going obviously. Just upstream of Kanarra Falls is a big boulder you have to climb up, then the canyon opens up. We passed several more waterfalls. This waterfall was one of our favorites because of the bright yellow fall leaves in the background.

Farther upstream is another section of slot canyon. Then another waterfall with a ladder. While the girls were putting their wetsuits on (the guys had already put theirs on), a youth group caught up to us. They were all wearing shorts, and they were freezing cold. This is the only place on the hike where we got wet above the waist because the waterfall pours down right on top of the ladder.

Eventually the canyon opened up again, and the sunlight came with it. At this point, there was almost no detectable trail. In a few places, there were some small footpaths, but it didn't look like very many people had come this far. At one point along the creek, we found some cool sandstone caves. Eventually we decided to stop for lunch. It didn't look like there were any slot canyons still ahead of us, so we decided to turn back.

We definitely plan on coming back to Kanarra Falls and Kanarraville Canyon. Next time, we'll just wear neoprene socks and not bother with the wetsuits. We definitely won't bring ropes or harnesses either. What an awesome hike!